Stop Right There! Understand the Life-Saving Kit on Your HGV

Advanced Emergency Braking Systems (AEBS) have been fitted as standard to most new HGVs sold in the UK since 2015. Drivers and operators of HGVs need to understand how it works, what it does and why it’s vital, according to Driving for Better Business, which has launched online guidance on the life-saving technology in collaboration with Thatcham Research.

AEBS, also referred to as autonomous and automatic braking systems, activates the brakes when a potential collision is detected and is highly effective in stopping or minimising the severity of a crash where the driver has failed to react.

It operates in three stages, each activating only if the driver has failed to act and a crash looks likely:

“There are two main types of AEBS,” says Simon Turner, Campaign Manager for Driving for Better Business. “All have RADAR looking far ahead, but the more sophisticated systems also feature forward-facing cameras to provide additional input into the system to ‘see’ road markings and signs. There are, however, limitations which drivers and operators need to understand to ensure they maximise the safety benefits of this technology. For example, if the truck’s speed is too high, the system might not be able to bring the vehicle to full stop but the impact should still be less severe. The systems are only designed to avoid collisions with vehicles directly in front of the truck so a vehicle that is partially in the truck’s path – say a broken-down car at the side of the road, half on and half off the carriageway, may not be ‘seen’ by the system. We’ve just produced a simple, short animation to explain all these points which Transport Managers can download and share with their drivers.”

Matthew Avery, Chief Research Strategy Officer at Thatcham Research said “We are really pleased to be launching this guidance for HGV drivers. AEBS is a crucial safety system, and we need to raise awareness of the life-saving benefits the technology can bring, not only to HGV drivers but other road users too. Heavy trucks contribute to a higher collision severity leading to a disproportionate amount of casualties in crashes involving heavy vehicles. AEBS plays a very important role in road safety especially with the recent changes made to the highway code and the increased level of responsibility HGV drivers face in a collision.”

Roads Minister Baroness Vere said: “I’m grateful to Driving for Better Business for producing this informative guidance. I would urge all HGV drivers and operators to learn more about and use this innovative technology, which could potentially be life-saving on the road.”

Drivers and operators can find out all they need to know for safe use of AEBS via the Driving for Better Business website, which includes short animations for both drivers and transport managers, a PDF factsheet for transport managers and a poster for staff noticeboards. The resources explain:

Independent road safety campaigner Meera Naran, whose 8-year-old son, Dev, died in a motorway crash involving a lorry on the M6 in 2018, backed the campaign.

“The impact of a HGV versus any other vehicle or vulnerable road user can be catastrophic if not fatal,” she said. “No one wakes up in the morning intending to harm another person and we all have a responsibility of keeping not only ourselves but others safe on our roads. Emergency braking systems have been shown to reduce the risk of fatal collisions and I will continue to campaign for legislation to be passed to implement this life saving technology on all vehicles in my son Dev’s memory, with the proposal of calling it Dev’s Law.”

A Truck Driver’s Guide to AEBS

A Transport Manager’s Guide to AEBS 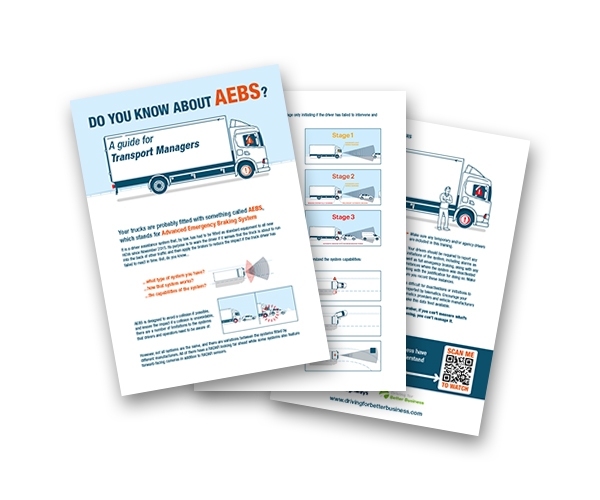 KEEP UPDATED WITH THE
DRIVING FOR BETTER BUSINESS PROGRAMME